Home / Fitness / Strength / Muscle Fatigue – How to Blast Through the Dreaded Muscle Failure that “Hits”...
Fitness
0 2381

If you’ve been working out for any amount of time, you’re probably well acquainted with ‘fatigue’, that sensation of your muscles being “done,” “cooked,” “toast”… You know, the “please have mercy before I’m permanently trapped under this weight,” or “you might just have to drag me off the track because I’ve collapsed” feeling.

We typically use the term fatigue to describe general sensations of tiredness and the accompanying decreasing muscular performance. What this really means is we “hit the wall” and can no longer perform reps on a particular lift; we can no longer run any farther or harder; we can no longer produce the “optimal” output of muscular contractions as we did at the beginning of the set or workout.

What Is Muscle Fatigue?

Fatigue is a very complex phenomenon in which multiple sites fail during muscular work. The underlying causes of fatigue fall into one of two categories: central (neuromuscular, of the mind/central nervous system) and local (peripheral, of the actual muscle site).

The central nervous system (CNS) acts much like an automobile engine regulator. Most cars are made with a regulator that causes them to “shut down” when the engine revs too high for too long. This mechanism protects the engine from “over-heating.” In the same way, our brains attempt to protect our muscles from tearing by reducing the rate nerve impulses are sent to our working muscles. In most cases, you’ll experience central fatigue before local fatigue. In other words, when you think you simply can’t do any more work because you’re so fatigued, essentially what’s happening is your mind is telling your body (muscles) to shut down. But in fact, you’re probably able to continue for another couple of reps.

“…when you think you simply can’t do any more work because you’re so fatigued, essentially what’s happening is your mind is telling your body (muscles) to shut down.”Local fatigue is related to local factors that limit the ability to perform muscular work. These include the energy systems (ATP-CP, glycolysis, and oxidation); the accumulation of metabolic byproducts (such as lactic acid); and the failure of the muscle fibre’s contractile mechanisms. The energy systems act much the same way as fuel in a car or a battery in a torch light. However, humans are different in that we have three energy systems within the muscle’s cells that are called upon at different times depending on the intensity and duration of an activity.

The first energy system is called the ATP-CP system and is called upon during extremely short and intense bouts of exercise (e.g., weight training, sprinting, and jumping). It works by repeatedly breaking down ATP (the basic currency of energy in the body) and rebuilding ATP using CP (creatine phosphate). During repeated maximal contractions, fatigue coincides with CP depletion.

The other two energy systems are called into play during exercises that last longer than 30 seconds. Known as anaerobic (or glycolytic) and aerobic (or oxidative), these energy systems are very dependent on the availability of glycogen (the stored form of glucose sugar). As with CP use, the rate of glycogen depletion is controlled by the intensity (i.e., how hard you train) of the exercise.

During sprinting, for instance, muscle glycogen may be used 35 to 40 times faster than during walking. Glycogen depletion and hypoglycaemia (low blood sugar) limit performance in activities lasting longer than 30 minutes. Long-distance runners often speak of “bonking” or “hitting the wall.” This refers to a perceived fatigue usually related to glycogen depletion. At this point, the body begins to use other forms of energy, such as fat and protein (which are not as efficient sources, thus making it harder to sustain energy levels).

During high-intensity anaerobic exercise, such as sprinting and weight training, our bodies produce metabolic by-products such as lactic acid and CO2. As these accumulate in our bodies, our ability to maintain the duration and intensity of exercise diminishes. And, when they finally reach a point of saturation, our muscle capacity comes to a screeching halt. This is often referred to as the “burn,” whereby the muscle feels like it’s on fire signalling you to stop.

Got all that? I realize it sounds like some fairly complex processes, which they are, so here are a few instances I’m sure you can relate to that will help clarify how these energy systems work in our bodies, and more importantly, how we can assist our bodies to increase their output and delay (or temporarily overcome) the onset of muscle fatigue.

Strive for ‘Progress’, not ‘Perfection’.
Anon

How Can You Overcome Muscle Fatigue?

While we can’t completely overcome muscle fatigue, we can certainly delay it. But, sometimes this delay can be the difference between sprinters winning or losing in competition or allow weight trainers to “push out” a few more reps (to produce new levels of strength and muscle gains). There are many strategies we can use to accomplish this goal, but here are a few I’ve found over the years to be particularly effective:

First, we must ensure your diet is optimized. Consuming an adequate amount and ratio of carbohydrates, fat, and protein is paramount. Typically, endurance athletes require more carbohydrates (anywhere between 40 and 60% carbs) than strength athletes but slightly less protein (from 30 to 35%); whereas strength trainers (weight lifters) or those who regularly participate in sporting activities should consume equal or greater amounts of protein to carbohydrates on a daily basis (about a 40:40 ratio of carbs to protein). In essence, carbs are to the body like fuel is to a car, they provide the necessary fuel to maintain or sustain energy levels during workouts.

A common mistake made by many athletes is the failure to stay well hydrated. I am not talking about drinking when you’re thirsty (as you may know, thirst is a sign your body is already slightly dehydrated). The importance of being properly hydrated cannot be overlooked. Dehydration can lead to significant performance decrements, not to mention the risk of sickness and, in severe cases, death. Even a three to four percent drop in body water levels (signaled by thirst and fatigue) can decrease your muscular contractions by 10 to 20%. To combat this, at least 10 to 12 glasses (250 – 300 ml each) of water (this doesn’t count sodas, coffee, or juices) should be consumed daily, always including during and after events when your body is perspiring.

Adequate rest is very important for delaying premature fatigue. Inadequate rest during training (i.e., between sets) and between workouts can cause unnecessary fatigue. A great rule of thumb for resting time between sets is just long enough to catch your breath. Squats take a little longer to recover from (maybe two to three minutes) because you’re training such a large muscle group. For smaller muscles, like biceps, you would need a much shorter rest, more like 45 to 60 seconds at most.

Another quick tip: recent research that studied the effects of enhancing recovery between sets showed that keeping intensity high after completed sets allowed weight trainers to perform more reps in later sets compared with those who passively recovered (sat) between sets. This means we need to keep moving during rest periods, so instead of sitting down to rest, walk around or go to another exercise for a different muscle group.

One of the most common (and fatal) errors I see with weight trainers, both beginner and advanced alike, is over-training. Trapped by our “more is better” mentality, many of us seem to think if we train longer, harder, and more often, we’ll multiply our results. Nothing could be more detrimental to your efforts to put on muscle and gain strength than training muscle groups too frequently. In fact, over-training can significantly impede the body’s ability to properly recover and rebuild itself. Only through enough rest (which includes proper sleep) and an adequate number of days in between training, will the body be able to recover and rebuild itself. The most common signs of over-training are lethargy, chronic fatigue, continued muscle soreness, insomnia, and a decrease in strength. If you sense any of these coming on, try taking off a day or two more in between training sessions and see how you feel.

There are many supplements that can help today’s athlete postpone muscular fatigue. Endurance athletes may benefit greatly from carbohydrate/electrolyte beverages such as Gatorade and Wild Water. These contain precise ratios of carbohydrates and electrolytes (vital salts and minerals) that can replace those lost during prolonged exercise, as well as enhance the body’s ability to sustain long-term energy.

Nutritional stimulants such as caffeine (or its herbal counterpart Guarana) can help delay fatigue for two reasons. First, it stimulates a cascade of hormones that cause a release of free-fatty acids into the bloodstream, causing the body to burn fat while sparing carbohydrates to use as energy. Second, it affects the CNS, thus postponing central fatigue and decreasing the perceived difficulty of the exercise.

However, if you can’t handle the jittery, nervous-type feelings you get from stimulants (such as caffeine), you might give supplements like tyrosine or Ginkgo Biloba a try. These supplements are not stimulants, so they do not affect your central nervous system (which causes the nervousness). Rather, they help increase your mental alertness and delay central fatigue (in the brain), thus helping to crank up your workout intensity.

So there you have it… there’s nothing fancy here… but enough to get you through that next workout with a little more flare and pizzazz! With the information at hand, you’re now armed with practical, safe, scientifically sound methods to overcome muscle fatigue, so you can train harder (possibly even longer) and become stronger, both mentally and physically, making every workout that much better. 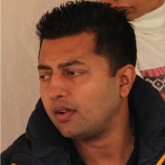